Yesterday, I took a huge box full of newsletters to the post office.

These were the letters God had been asking me to send for almost a month and a half and, here I was, finally about to get them in the mail. It was a big deal.

It amazes me (in a not-so-good way) that I think it’s smart for me to have control over something. I serve the One who can literally do anything and, yet, I still struggle to hand it over.

Little by little, I started to send the letters down the blue, metal shoot. I started getting nervous and, just to be safe, I paid attention to the instructions on the box for if you need to get something back out of it.

As I was doing this, I was also praying. I was asking God to make sure the postmaster would handle each of the letters with care and get them where they needed to go.

Then, God said something:

“Do you really think you’re putting these letters into the postmaster’s hands? Don’t you know that I am THE Postmaster?“

I realized that even though I was throwing these letters down a random shoot, I was actually placing each of them in God’s hands. I was giving them to the true Postmaster.

God is The One who will get my letters where they need to go. I can’t help but imagine Him hand-delivering them to each of the recipients and then inviting them to partner with me. What a cool thing to think about.

You know what’s still funny (in an annoying sort of way)? Even after everything God had just said, I was still nervous.

Have you ever experienced that? It’s scary. It shouldn’t be, but it is.

A very dear, family friend of mine recently said that this life really isn’t her story- it’s God’s. What a beautiful statement.

Friends, we have got to learn to give God all the control and to be HAPPY when we do.

This isn’t the “how much can I do on my own” story. This is God’s story!!  If we can’t learn to let go of the reins, we are going to live a life full of fear and frustration.

Start thinking of God as the One who determines your paycheck. Think of Him as the Leader of this country. Think of Him as your Postmaster. Why? Because, ultimately, HE IS and that’s a GOOD thing!!!

Yours, O Lord is the greatness and the power and the glory

and the victory and the majesty, for

all that is in the heavens and in the earth is Yours.

Yours is the kingdom, O Lord, and You are exalted as Head above all.

Instead of being fearful or hesitant to give God the control, be thankful that He already has it. He is “Head above all.”

Our Father has the most wonderful plan for each and every one of us. For us to say that we know best, or that we have the best ideas, is so far from the truth.

If I hadn’t officially given God control of my life, I would be so bored!! Giving God the reins might mean that I have to do some scary things, but at least I know I’m doing those scary things for God and that I’m not doing them alone. My life has meaning now! It has purpose!

My prayer for each of you is that you will give God the control and let your story become His story. Have the nerve to step out of your comfort zone and do something big for God. Remember that the “something big” might seem like something small at first (like sending out newsletters), but those small things will quickly turn into big things and you will be amazed at what God does next. I promise you, you will not be disappointed.

Thanks so much for taking the time to read this post. I’ll be sending updates soon to let you know how fundraising is going and how you can partner with me in prayer and support. If you would like to support the work I’ll be doing with CFCI in El Salvador, please go HERE. 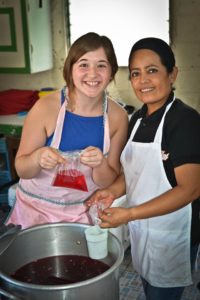 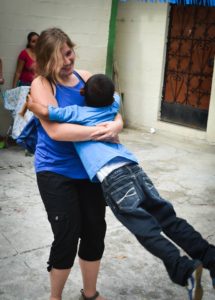