One of the biggest lessons of my early adult years is that more than one thing can be true.

Something can be wonderful and difficult at the same time.  Hard, but worthwhile. Awful, but necessary. Full of celebration, and full of grief.

So often this is true for the journey of transitioning into, and out of, full-time missions. It is an exciting, terrifying, hard, joyous thing. Both leaving home, and coming back.

Amidst a people, culture and language not your own, you are often left feeling exhilarated and overwhelmed. In both instances, in need of Jesus.

Lauren DeHays has been a full-time missionary with CFCI in El Salvador since October 2014, and right now is facing the tough and unexpected calling of.. going home.

Back to the United States and into the unknown. Exciting and heartbreaking, all at the same time.

On her first missions trip to Honduras and Guatemala, Lauren fell in love with Latin America.  She went on three separate trips to El Salvador before she felt the Lord leading her to return there full-time.

“For me, God’s calling to missions was quite a long process,” she said.  “He used a lot of things in my life to slowly open my heart to going long-term. He closed and opened many doors. I began hearing God ask me about the things which had brought the most joy in my life.  One of the things that came to mind was serving in missions. As I thought about all the mission trips I had been on, it bought me so much joy. I began toying with the idea of going for longer-term, and remembered something that my pastor had once said about knowing if what you’re doing is from the Lord. Often it’s when these three things are true: first, it honors God, second, it blesses others, and third, it brings you joy. I realized that, for me, serving in missions would definitely uphold these 3 statements. God eventually began to give me so much peace in the most specific and amazing ways about my decision to serve longer-term, that I knew this was what He was calling me to do.”

Lauren has been serving in El Salvador in a number of different ministries. She helps with communications, as well as co-leading short term missions teams on the ground.  She also coaches a girls’ volleyball team ministry as a means to reach out to, mentor and serve the girls in the San Salvador community. 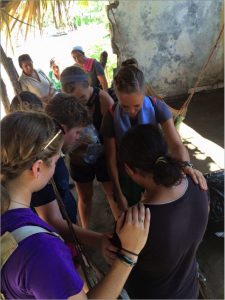 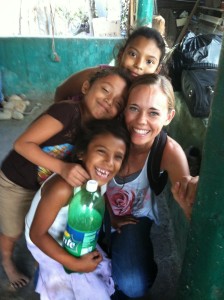 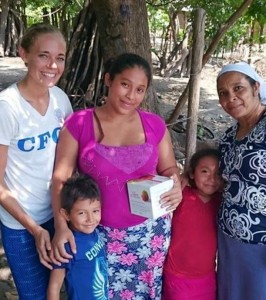 Some of Lauren’s favorite ministry memories have been serving in the impoverished community of La Calzada. “Despite the intense heat and massive amount of mosquitoes, it’s a place where life feels simple, easy, the way I imagine that God wants us to live; free from the distractions of our busy world and at one with nature, spending quality time in community and fellowship with others. Every time I’m able to be at the Island I get the feeling that this is a small glimpse of what the Garden must have been like. I am truly blessed every time I am there.”

Through her time on the mission field, she has learned so much about God and herself. “I’ve learned and seen that God is the ultimate Provider; that He is faithful to His word when He says He will take care of me. Through support raising, protection, and so many other details that only He could have worked out, I saw just how true God is to His provision and promise in this area.”

And now, Lauren is trusting the Lord once more as He calls her home. “I honestly don’t really know what God has for me next. That’s the big step of faith for me, following God back home and into the unknown.”  That brings us back to the reality of two things being equally true. Lauren is facing the heartbreak of leaving behind her relationships, friendships and ministries in El Salvador, as well as the joys of the nation itself, including the laid-back lifestyle. However, there is also the joy of being reunited with family and friends, and the excitement in trusting God with new things to come.

Please join us in praying for Lauren as she prepares to transition back to the United States, and what God has for her in this next season.

“Through God’s people here in El Salvador, I’ve learned that God doesn’t particularly care too much about our jobs, or what we do. He cares more about our hearts and who we are in Him. He values us for who we are more than our works”.